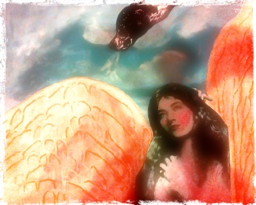 a cape to warm the travel
a force to lift a tale
a story born of nature
a wish for mercies unveil
Posted by soozie at 11:30:00 PM 2 comments:

thru the streets the trail weaves
pocked by crumbs of candy corn
hauntings & howlings under moon's spell
tonight on All Hallows' Eve
Posted by soozie at 9:55:00 AM 1 comment:

the cusp of longing 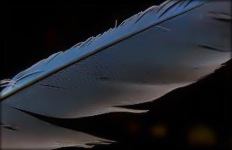 it's soft and it's rolling and cold as the hollow
the passing of days in years deep
love-piercing and bold as the tail of a comet
come away to the bite of dreams keep
Posted by soozie at 4:21:00 PM 3 comments:

We live, work & play in this strange world where our real life and our online 'second lives' collide.  How we engage & respond has morphed over the years to include this public format where love is declared, battle lines are drawn & score is kept by some illusive & ever-changing social sentry.  What did we all do before technology allowed us to 'write it out'?  We wrote it out : long-hand & private, in notebooks & journals .. with sloppy pages of self-mutilating-depricating angst. Well, that's at least what I did. Now, I will tuck it here for an immediate, cathartic release. Still angst-ish & full of remorse for the definitions & crumbs that, as a parent, I have laid along the path. Few will read it . .  maybe a few dear souls, but not the players in this melodrama. This immediate cathartic process now spent.


Where exactly is the 'Parenthood' moment? That argumentative tumult of hot feeling that bubbles & froths spectacularly during some barbed sibling battle ? All hurts & wrongs aired over a soft Bruno Mars ballad rising in the background . . . faces flushed with anger & mess, until someone storms out causing semi-confusion before being pursued, or the tension is broken by some innocent gesture ; the dog jumps on the table, a silly ringtone is heard, a child says something pointedly astute ... and after the Chanel #5 commercial, we find the Bravermans / Us, laughing & engaged ... once again seated around some colorful al fresco feast. Yea. I want that.

I think I had it with my dad to some extent.
I am an only child, so the concept of siblings not 'fixing' things ... not getting along is way beyond me.
What a bunch of lucky basterds you all are !! People with siblings.
Ready-made friends for life !
Family with a capital F.
So, after my mom died, when it was just dad & I ... well, we would fight. Hard & emotional & until I would find myself collapsed & sobbing against his shoulder, as he hugged me to him - hard. And emotional. Then he would say something like, "Come on, let's go have some crackers & peanut butter." And we would be better somehow, bigger & healed.

My husband has two brothers, each with wives & families. We have been estranged from them now for a couple years ... this was explained in a previous post & I won't go there.  It is relevant, but only so much ....
suffice it to say, there are vast political differences we seem unable to bridge.
But recently, ( ok, like tonight ) my husband's older brother, took it upon himself to bully my daughter on her social media page on a political statement she posted.
She liked Obama . She did not like the 'other guy'.
He called our POTUS an idiot, and he called her an idiot.
In the social media world, this is a troll move, though he was just being an ass. Where does this come from, this need to feel more powerful than another ? I don't understand. I am a deer in head lights a la tharn.
Who does this ... and why does it seem to so fall predictably along political lines ? I do not want this to be a truth, but it is glaringly apparent. This is not how we respect family, grow our children ... This is not how we learn to lean & listen across party lines, across divisions of any kind.
It got worse & it got better.
My daughter replied back with fierce passion & a resilient stance. Declaring her right to her own opinion, her right to say what she wanted & the ownership to the contents of her page. Yea, she dropped the f-bomb. Big fucking deal.
She was accurate & sassy.  Also upset.  I was pleased she walked boldly into her voice.
I did not jump in, did not fuel the proverbial fire.
Then it got worse ... he threw the family under the bus so-to-speak, well, me more accurately. Going back 25+ years, to a time when I commented a crime.  A significant act, under significant circumstances that I paid dearly & thankfully for.  I survived the consequences - I rose up & out.   It was a horrible, nightmarish time, that echoes still every day of my life, in sometimes unexpected ways, and in some surprisingly profound ways.
But to throw it in the rant, as this example my daughter is aspiring to ?
Wtf. This is akin to throwing pandas into a debate about Detroit.
This is an action based in hate, fear & bullying.
This is not something family does. Oh no no no …. And do not bully my child.  I will eat you.
My daughter is a warrior Celtic Princess of the highest order - capable, smart, beautiful & sassy. It is heartbreaking to witness someone over 50 attack someone not yet 22.
How fucking dare he, how small & fearful one must be to live & act with such vile emptiness.
This is family with a capital F.

I want a Partridge Family family, a wild & joyful Parenthood family, I want Eight is Enough, Dawson's Creek, and shit, throw in 41 Jump Street .... but I want a family that hugs it out, stays and sees it thru until the love hits ...
I want my father's shoulder & crackers with peanut butter waiting on the other side. No more hate. No more.
We will be our own family with a capital F, a family with enough love & fearlessness to always make it thru to the crackers & peanut butter.
Posted by soozie at 12:11:00 AM 5 comments: 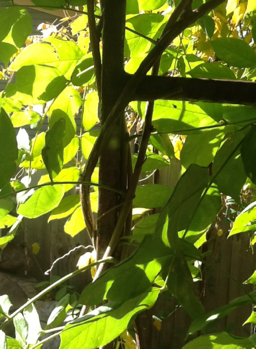 it doesn't work like that ~
wanting seeds longing
and takes you away from the shade afforded those who breathe in the three o'clock dust-atoms of autumn wisteria
blue jay calls to winter's snow to come easy, come gentle
kneeling at the alter of crisp borealis nights
skin stretched over bones replete with enough of you
surging to lie sure & solitary to the sun
no tempest worth the price of unknowing
no flared ego rising into storied tales of hops & ash
be still & listen
the blue jay calls for you by name . . .
winter
Posted by soozie at 3:14:00 PM 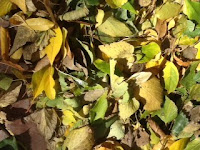 dangled
hanging
treading
poised upon the thin, dry vermillion wire of autumn
balance illusive
time irreverent & fierce
prosperity viscerally teasing with its apple warmth
gathered molecules of venus
awareness mine  .…
all mine
. .  for a time
the wind north, north-westerly
blustering with fractious indecision
as we tumble to 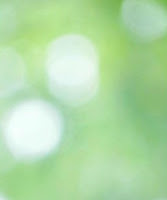 Candy-light dappled memory . . . sunshine day of early fall,
Summer echoes as a secret carried in a blue backpack
Waiting in the hallway
Playful - easy
Colors danced as providence pulled along
No spy-games today . . determined goal set
Anticipation
Suddenly stretched & waiting in someone else's rumpled space
I have always possessed a fondness for texture, corvids, corvairs, snow, rain fragile things, the smell of summer grass and your birthmark
A map to home, my compass . . . found
Stretched & waiting with studied diligence & mirth
To be noticed & touched in the sieved air of an afternoon
Something smells of dust motes & oranges
Reverence beckons . .
Walls fade . .  sound & light fractured ... dappled still against the awakening
An ease of intimacy is discovered . . . and the strange tempered blend of
Pressing weight & surrender
Pleasure & pain . . lying alongside your length was a lock into the flecked space of
Something exquisite & unfinished
Fireworks & forgiveness selected,  and set aside for a distant hanging moment
No struggle with definition & words, as if we just knew
This
Was
Unlocking the birthmark that points North
Recognizing secrets can be shadowed & cut with a sharpness divine
Tapped in and set afire
I stole a shower to study the abstract release of red ribbons watercoloring down my thigh
And felt hollowed - as if a part of me had been pulled out
Filled now with the dappled
Candy sunlight of that vermillion moment ....
Posted by soozie at 3:09:00 PM 1 comment: 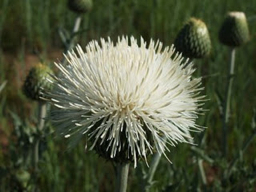 Gentle-man's Choice ...
Take me to a movie and let's put m&m's in the popcorn
I will unzip you
Buttered
Nesting my hand there along you
in
Sacred asanyukta - I will
Seamlessly take you to the sandstone edge and
We will jump into woodycreek canyon ... together
Let me lean into you at the river
Water, wildlife, wheat & weeds
Syncopated & dancing
Setting a thistled rhythm of deepness & need
Wet open wondering ....
I will wear black stockings, leopard print heels & a little black dress
You are in Armani : slacks, white pressed shirt, oxfords .
And we will eat tender & rich & divine
Escargot, black mussels in thyme, garlic & Guinness
Pinot Grigio
Full, yet hungry of that place only we travel
Pink cotton-candy mouthed surrender
Taunt, tight . . yielding.
This End Up ... Mr. Darcy at the door
" If lost return me to . . . "
Take
It .
Paint my vanilla-orchid-rising in deep indigo, heliotrope & pale blush
That's right . .#23 kolinsky red sable
Bracken paints Rebecca
By hand . . .and tongue
In dreams
Your hand fits mine as we walk,
discovering
the people-light of places old & forgotten
Stories unfold with questions asked & topaz smiles
Cool of red brick & warm of marble yellow tells tales old & laced-amber
In New Orleans, I will hold you captive
Feasting on filet mignon, strawberries & creme brûlée .....
Easy-naked-MTV-intimacy
found in the
between
Do not wake me come morning as this dream is far too sweet and
We will adventure deep into the French Quarter to find an elevator
kiss me . . . french blue
Posted by soozie at 9:12:00 AM No comments: